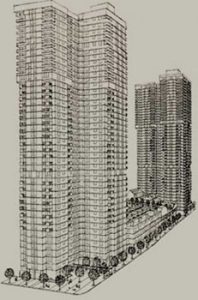 Construction of the Manhattan Plaza buildings began in the early 1970’s as part of a larger plan to revitalize the blighted Westside of Manhattan. At that time this part of Manhattan (between west 34th and 59th Streets) was known as “Hell’s Kitchen.” While the neighborhood included world-famous Broadway theaters, the area was more infamous for its rampant crime, drugs, pornography and prostitution.

As originally planned, the buildings were a commercial venture intended to provide affordable housing for middle and upper income people who, it was hoped, would move in and help revitalize the blighted area. But things did not go as planned.

As a result of New York City’s financial crisis of the early 1970s, and the fact that middle class people did not want to move to Hell’s Kitchen, construction stopped and the buildings sat vacant, the apartments un-rented. Then came an idea. Out of what many saw as a failure, others saw as unique opportunity. When developers, elected officials, community leaders, representatives of the theatrical industry and the federal government joined forces, no one could have predicted the outcome. Manhattan Plaza would re-open its doors as subsidized, affordable housing for the people who had always been the backbone of this community – the people who made their living in television, movies and the performing arts.

Since then the list of tenants whose lives were profoundly impacted reads like a who’s who of show business and the arts, all because – at one time in their lives – they were given a chance to survive and thrive when the needed a helping hand